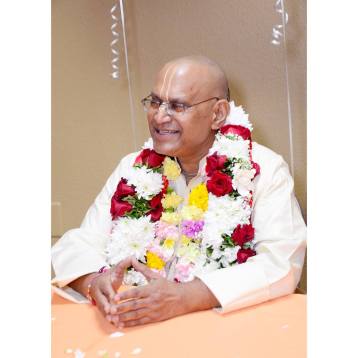 So much of my childhood narrative focuses on my mother; that she homeschooled us, that we were spoiled with attention and care, that there was so much love growing up – so much so that sometimes my father, our backbone, gets left out of the details. He’s incredibly smart – a university gold medalist and a hardworking immigrant who came to this country for opportunity and worked his way up as both an engineer and a salesperson. He enjoyed a close relationship with my grandfather and after his passing, decided to (in the 80s before it was cool) quit the working world and spend his time as a “doctor of the soul”, preaching the message of the Bhagavad Gita to primarily the Indian diaspora. He chose this demographic because we have all grown up with some semblance of spirituality and in pursuit of the American dream, we neglect all of that valuable knowledge to focus on superficial success. He gave up material comfort, status and opportunity to live at the will of the Lord on donations for his preaching work. No one understood the meaning of this; not anyone in his family, certainly none of his friends and he became the butt of a number of cruel jokes, the least problematic of which was that he had gone crazy.

I never knew my father outside of his identity as a Hare Krishna devotee and a staunch follower of Srila Prabhupada. My parents chose, as immigrants, as educated, capable professionals, impervious to societal pressures of a safety net, the decision to raise us in a very specific way. We were temple children – raised attending every morning service, studying scripture, strict vegetarians and practitioners of a lifestyle that is only recently coming into vogue. Despite living on the poverty line, we were content with what we had, living with the trust that the Lord would always provide for us, despite our lack of a fixed income. (Happy to report that He did, with some really far out stories of how.) We were constantly questioned, especially my parents. Were they ruining our lives by not giving us opportunities? Were we getting enough protein? Were we being given the choice of expression? Was their “craziness” going to rub off on us and “ruin our lives”? Were they setting a terrible example by not following a model minority path to success? Family gatherings were tense – we were always the weird ones, excluded by our beliefs, often finding that our treatment as the “other” was casually justified by the very teachings we ascribed to. “Aren’t devotees supposed to be tolerant?” was just one of the phrases that used to infuriate me. As if the decision to choose something different, the desire to become spiritually cognizant, the choice to live an alternate lifestyle stripped us from the very emotions that made us human.