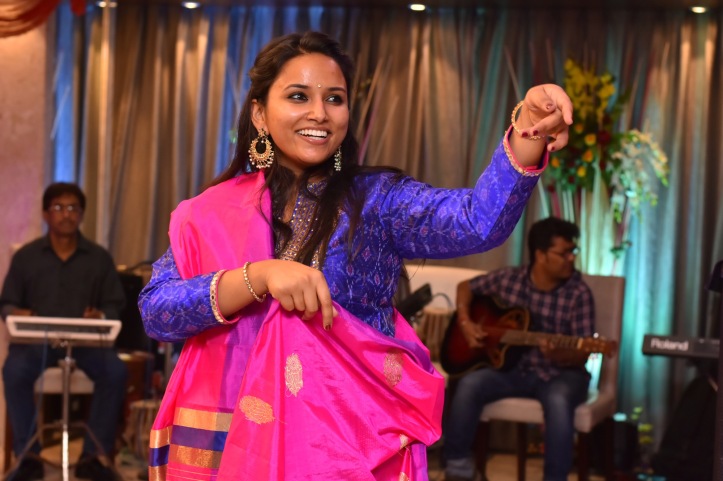 It was vulgar to dance to these songs. The munnis and the sheelas and the chikni chamelis with their second hand jawaanis couldn’t compare to the divine elegance of Srimati Radharani or the pitter patter of Krishna’s feet as he danced atop the head of the Kaliya serpent. See classical dance told our stories, highlighted a glorious past of a dharmic India. Shy, chaste women complain of being teased by a naughty, heart stealer of a God. But on a mundane level set in a modern context it is lascivious. I was the daughter of a pandit, sheltered from the nonsense of Bollywood, the thoughts of sense gratification erased from my mind by careful mantra meditation. But it never went away. As early as four, I’d do my level best to remember the lyrics to Rangeela. When the harmonium was brought out, I’d try my hand at Silsila ye Chaahat ka. I’d rebel by inventing a “new” tune set to that one Bollywood song I could not get out of my head. Then the abhinaya (expressions) of 7 years of Odissi #classical dance set in. I learned to bring these emotions to life on my face, vicariously telling someone else’s story. College and Youtube developed simultaneously and I could now access any song imaginable. I spent hours rediscovering the forbidden songs of my childhood and creating playlists that defined my present. Still, my mind raced to consider the criticism – was this proper? It took many years, missed opportunities, hundreds of songs, and the repressed organic choreography of over twenty four years, before it all came back to me.

It doesn’t matter who is watching me now. The music commands me and I am a hapless puppet in its hand. Dance is a gift, my mirror is my friend; I watch my eyes conveying the stories my soul has learned and unlearned, the rest of my body following suit, like nobody is watching, but me.