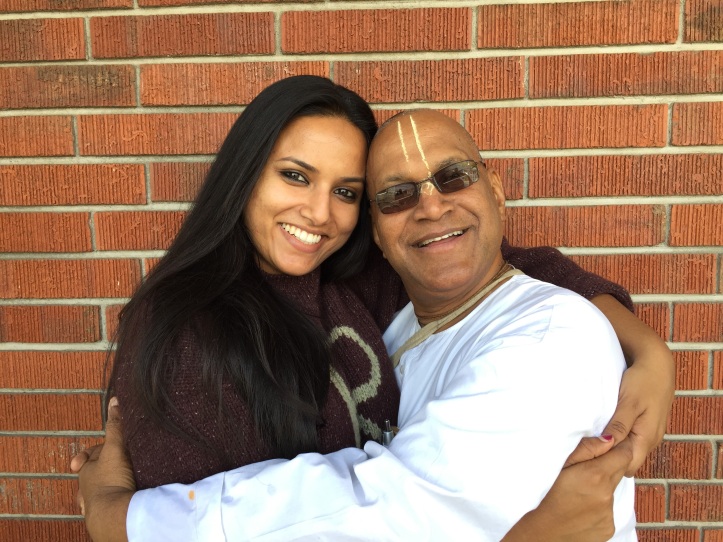 There’s a new facet to my father that I’ve started to deeply admire recently. In a world of pretension and artifice, he has spent the last 31 years wearing his beliefs on his sleeve. Proudly stamped with bright yellow Tilak on his forehead, Shikha tuft of hair, salt and peppery with flashes of Gopi Chandan wiped on as an afterthought, kanthi mala tulasi neck beads dark brown and caked with powder, crisp white dhoti and kurta at the ready, glasses gleaming to match the face beaming, that is my father. No matter what. No matter where. No matter when. He honestly couldn’t care less what you think but if you stop to ask him about his clothing, his eyes will light up and you will likely be told about the goal and purpose of your life, will be quoted the Hare Krishna mantra and 9.5/10, you will leave with a piece of literature and a piece of his signature peda prasadam. For the entirety of my childhood I thought this was normal.

And then I became a teenager and as I was sequestered into picking a box, I projected that fear on my dad. As I grappled with my identity, I tried to protect his. As I made mistakes, I felt guilt eat away at the thought of someone questioning his integrity over my individual discretion and decisions. As I struggled with my faith, I became combative towards his. As people within our religious movement questioned my identity, I tried to push my connection to him away. It is never easy being a preacher’s daughter. Or maybe I should rephrase that – it is never easy being a rebel’s daughter. It will fill you with equal parts guilt and pride every day of your life. You will look at your dad with wide open eyes in awe that he just never cared what other people thought and wish you could have that ability. You will marvel at the courage it took for someone to continue on his journey when his own family members thought he’d gone nuts. And then you’ll want to dedicate every success of your life to him because his sacrifice, his prayers and his love however silent, however difficultly felt, however unconveyed but simultaneously all engulfing, are the only things that fueled your strength.